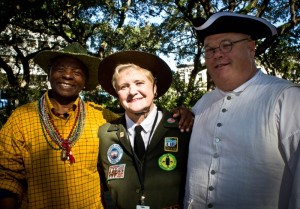 Take a walk on the benevolent side

In this town, it’s not unusual to see a man dressed in colonial-era knickers and big buckle shoes spouting quotes from the Declaration of Independence. Or a Gullah-Geechee storyteller shaking cowrie shells as he sings a song from West Africa. Or a grown woman dressed in vintage Girl Scout garb explaining the role of women in the early 1900s.

For the most part, Savannah’s walking tour guides concentrate on one area of the city’s multi-faceted history—there are a lot of stories to tell, and tourists only have so much time. But a new walking tour has brought together some of Savannah’s most illustrious historical characters in a single narrative, one with the aim of helping promote a healthy lifestyle in the present day.

The A-MAZE-ZING Walking Tour is a lively 90-minute sojourn through the squares that donates up to 50 percent of its proceeds to a local health-based charity. Its launch on Saturday, Oct. 26 holds the banner for breast cancer awareness and early detection and will benefit Community Health Mission, a free clinic that serves uninsured and underserved women.

“We serve up to 850 women a year, and we tend to get them at the later stages of the disease,” explains Dr. Miriam Rittmeyer, CHM’s executive director. “Their survival depends on early detection and timely treatment.”

Dr. Rittmeyer has worked with tour founder J’Miah Radhi Nabawi “for years,” and likens CHM’s partnership with the A-MAZE-ZING Walking Tour to the journey patients must navigate through the health care system. Upcoming recipients of the tour’s assistance are organizations that provide diabetes, heart health and healthy eating education.

Nabawi, an award-winning storyteller and a contributor to Old Savannah Tours, conceived the idea as part of his performing arts company Savannah Storyfest and leads the walking tour as Quashee Alice, a Gullah Geechee elder. Dressed in farmer duds with a shell-festooned walking stick, the always exuberant Nabawi leads tour participants in Congolese games and call-and-response chants, a high-energy alternative to the sometimes-staid tone of conventional walking tours.

“It’s very interactive,” he smiles. “Savannah has been multicultural from the beginning, and we want to promote history as well as our individual heritage.”

With the idea of representing a broad swath of Savannah history, he has incorporated licensed guides from several established tour companies. He enlisted fellow Old Savannah Tours guide Jason Wallace as the Town Crier, a poetic character who unfurls a yellow scroll announcing the news of the newly independent United States.

An aficionado of the Revolutionary War and Civil War eras, Wallace agreed to lend his expertise when Nabawi approached him with his idea for a theatrical walking tour.

“It gives an overview of all of Savannah’s history and it’s for charity? I’m in,” declares Wallace.

Also on board is Mary Anne Street, who plays an enthusiastic and well-informed Juliette Gordon Low. Street also gives walking tours through Tales of the South and uses the persona of the famed Girl Scout leader to inform visitors about the role of women in Savannah’s history.

“I also tell a ghost story or two,” she winks.

Another notable Savannah woman is represented on the tour in the form of Catharine “Caty” Greene, wife of Revolutionary War general Nathanael Greene and now considered by Smithsonian researchers to be the true inventor of the cotton gin (a radical invention historically attributed to another Savannahian, Eli Whitney.) In a mind-blowing turn of family history, she will be played by local drama teacher Kelly Greene Szabo, who is a direct descendant of Mrs. Greene.

Rounding out this spirited crew is Karen Wortham, the founder and director of Journey by Faith Tour Company. A scholar of the city’s African American history, Wortham wrote the history of First African Baptist Church as well as Indigo Journey, a chronicle of the city’s slave trade. She conducts a tour of the same name, pointing out areas significant to slave history that parallel Savannah’s more mainstream tales.

“Few people realize that the Weeping Time was supposed to take place right here in Johnson Square,” says Wortham, referring to the tragic sale in 1859 of 436 men, women and children that tore apart families and deepened the national divide over slavery. Because of space issues, the sale was moved to the Ten Broeck racetrack.

Johnson Square is also the site where the Declaration of Independence was read on August 10, 1776—a month after the rest of the country heard it, reminds Wallace.

“From the Civil War to Civil Rights movement, this spot has been essential and we each have our stories to share about it,” points out Nabawi. “It’s been a true collaboration.”

The pleasant promenade of the A-MAZE-ZING Walking Tour is punctuated by a scavenger hunt, and future tours may include lunch and start further south at the Metz House on Forsyth Park. This Saturday and through the month of October, all proceeds help provide mammograms to women in need.

“We bring in history, the beauty and magic of Savannah, plus women’s health — it’s a whole conglomerate of things coming together for a good cause,” says Street, tipping the brim her scout hat.